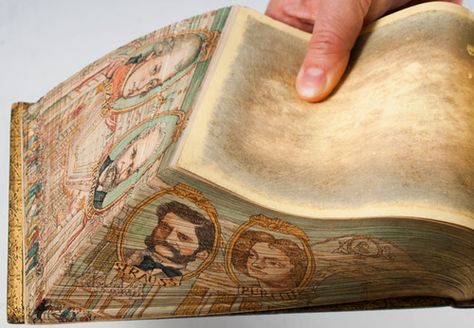 Books of old have long been adored for their beautiful artistry, but few know that hidden along the fore-edge resides a secret trinket. Such masterpieces were created to provide readers with stunningly conceived paintings when fluttering through pages and if viewed from different angles could reveal images as varied as landscapes, mythical creatures or royal armorials.

Tucked away in some of the earliest books, a hidden form of artwork has been making its home on the inside edges. Dating back to as early as 17th century England and known by many names – invisible paintings, gilt edge painting & disappearing fore-edge paintings – these mysterious works have had book admires stumped for centuries. What distinguishes them from traditional artistic pieces? The ability to vanish when pages are closed! In order to properly admire such craftsmanship, one must slightly bend each page into place revealing what was only ever imagined before: an intricately crafted design resting just within reach…

Two distinct styles emerged: painting on fanned and closed pages; visible when either opened or shut respectively. The difference between the two lies in how they are painted – directly upon a book’s surface versus applied to its margin along with watercolor paint for added vibrancy.

For centuries, a special art form has been hidden in plain sight; single fore-edge paintings have adorned the pages of rare books. These works are only visible when their intricately gilded or marbled edges are fanned to reveal an almost magical painting beneath!

The Double Fore-Edge Painting. This hidden style entails painting on both sides of an open book’s page margins so when fanned either direction, two distinct pieces can be admired. Little is known about these special works – it’s estimated only 2 to 3 percent are double fore-edges!

The triple fore-edge painting adds a third image which takes the place of the gilt edging and is visible when the book is closed. There are also “panoramic fore-edge paintings” which occur not only on the fore-edge but the top and bottom edges of the book’s pages as well.